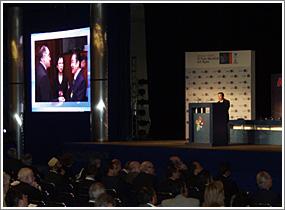 “During the regional process leading up to the 4th World Water Forum, it became clear that several water-related issues and challenges were common across the entire Asia-Pacific region. Furthermore, with the increased interactions in the implementation of follow-up activities to the 3rd World Water Forum held in Kyoto in March 2003, stakeholders in the region quickly recognized that the region’s diversity was not an obstacle but rather an asset to the identification and adoption of solutions to specific water issues. Based upon this common understanding, we will establish a new network, the Asia-Pacific Water Forum, to work in complete solidarity to identify and adopt solutions to water issues in the region.”

Water is crucial to life and all forms of social, economic, and environmental development. According to the UN Task Force on Water and Sanitation (2005), safe water and sanitation is a prerequisite for achieving the Millennium Development Goals (“MDGs”) and for sustaining good health and quality of life.

There are already a large number of stakeholders, from international institutions to local NGOs, who are spearheading important activities and have achieved significant results throughout the Asia-Pacific region. For example, between 1990 and 2002, 35% of the total urban population (representing over 368 million people) gained access to improved drinking water. As recognised during the participatory regional consultation process that preceded the 4th WWF, such improvements can be further enhanced by harnessing the knowledge and experience of these stakeholders and creating a cooperative platform through which this growing knowledge base can be disseminated.

The Asia-Pacific Water Forum (“APWF”) was initially proposed by the participants during the 4WWF Regional Preparatory Process that was coordinated by Japan Water Forum (“JWF”). During the Ministerial Meeting that lead to the Joint Declaration, the establishment of the APWF was supported by several agencies in the region, including ADB, UNESCAP, GWP, KWF, SOPAC, JBIC, MRC, FAO, UNDP, UNEP, UNESCO, UNICEF, UNISDR and IUCN.

In calling for the creation of the APWF, the region’s water ministers sought to establish an effective mechanism to encourage more collaborative efforts on water resources management and to accelerate the process of effective integration of water resources management into the socio-economic development process of the Asian and Pacific region. On the Asia-Pacific Day at the 4th WWF, the establishment of the APWF was announced by Mr. Ryutaro Hashimoto, the President of Japan Water Forum.

The APWF was officially launched on the 27th of September 2006 at the headquarters of the Asian Development Bank, in the presence of former Prime Minister of Japan Yoshiro Mori, who succeeded Mr. Hashimoto as the President of Japan Water Forum.

Graph1: Population without improved water source by region in 2004(in millions)

Graph2: Population without improved sanitation by region in 2004(in millions)

source:WHO , UNICEF MEETING THE MDG DRINKING WATER AND SANITATION TARGET THE URBAN AND RURAL CHALLENGE OF THE DECADE

In 2002, approximately 669 million people in the region were still without access to safe drinking water and 2 billion people still lacked access to improved sanitation facilities.