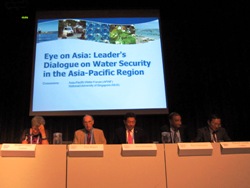 Eye on Asia concludes with a panel discussion among leaders from government, civil society and academia on water security in Asia-Pacific region. The panel and participants will discuss the role of leadership and new policy initiatives in controlling pollution and achieving universal access to water and sanitation. The panel discussion is part of APWF’s Ministers for Water Security initiative, which was announced at the start of the 5th World Water Forum by APWF’s President Yoshiro Mori, a former Prime Minister of Japan, and supported by the ministers in the Asia-Pacific region. 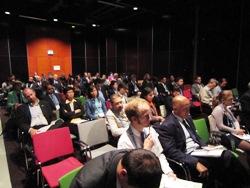 The initiative is raising public awareness and encouraging cooperation among leaders in government, private sector and civil society on policies, investments and innovations that will increase water security in Asia. APWF encourages ministers of finance, planning, health, disaster management, infrastructure, agriculture, energy, environment, water, and other water-related portfolios to join the initiative to demonstrate how water security can be increased by working jointly across these sectors. Leaders from the private sector and civil society are also invited to join the dialogue with the Ministers.